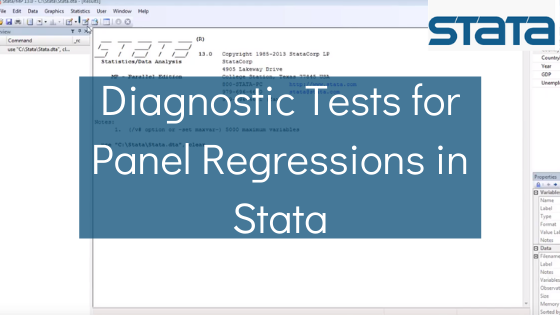 When performing a panel regression analysis in Stata, additional diagnostic tests are run to detect potential problems with residuals and model specification. In order to rely on the estimated coefficients and consider them accurate representations of true parameters, it is important that the assumptions of linear regressions formulated in the Gauss-Markov theorem should be met. Most of the assumptions relate to the characteristics of the regression residuals. The latter should be independent, without serial correlation and homoscedastic. The latter means the residuals should have equal variance.

Finally, the Hausman specification test for choosing the appropriate type of effects, either random effects (RE) or fixed effects (FE) should be conducted in Stata. The output of the FE specification is recorded first. Next, the output of the RE model is recorded. After that, the Hausman test is conducted. The null hypothesis of the test is that RE model produces consistent coefficients and therefore it should be preferred since it is more efficient than the FE specification. If the p-value of the test is higher than the significance level, this hypothesis is accepted. In the opposite case, the FE model is chosen instead. The latter is less efficient but always consistent.

We use cookies to ensure that we give you the best experience on our website. If you continue to use this site we will assume that you are happy with it.Ok