Creativity is one of the primary drivers of innovation in the contemporary business environment that can impact the effectiveness of companies to a substantial degree. This effect is confirmed by the examples of such renowned organisations as Apple, Kodak and Xerox (Puccio et al., 2017). Unfortunately, the role of this practice in the context of smaller companies has received much less attention from the previous researchers in the field (Taylor, 2017). The aim of this essay is to analyse what creativity drivers are utilised by British small and medium enterprises (SMEs) to narrow the existing gap in this dimension between the UK and European Union countries (Goldman Sachs, 2015).

2. The Concept of Creativity and Its Antecedents

Creativity is usually defined as an inspirational moment or a subjective experience that may or may not result in some tangible products utilising this new concept (Taylor, 2017). While multiple test procedures have been developed to measure the outcomes of this practice, such measurements are often complicated as the end product depends on both the initial concept of the creative inventor and on the steps taken by other individuals and organisations to implement this vision into specific goods and services and market them to prospective customers (Bratnicka, 2015). The study of Blomberg et al. (2017) discovered that creativity could be driven by a number of factors existing on individual, group and organisational levels. In companies, leadership and management practices, knowledge management, resources availability and organisational structures were found to be relevant to the effectiveness of the creative activities (Ali Taha et al., 2016). From the practical standpoint, leaders have to manage their followers by using transformational leadership or other leadership styles supporting creativity and thinking ‘outside the box’. Furthermore, leaders need to provide the necessary organisational assets for the implementation of new ideas (Blomberg et al., 2017). That said, highly hierarchical structures and the lack of knowledge management systems could hinder the effectiveness of these activities.

In the physical goods domain, creativity is often defined as a combination of usefulness and novelty (Becattini et al., 2017). New products have to satisfy the lower levels of Maslow’s Hierarchy of Needs while adhering to its higher levels by offering genuine experiences and rarity. These qualities are deemed necessary by end consumers to substantiate the preference towards the developed product. However, it should be noted that creativity is stimulated by different motivators at individual and organisational levels (Nisula et al., 2017). According to Turnbull and Wheeler (2017), employees and experts in firms are primarily motivated by four factors, which are presented as follows. 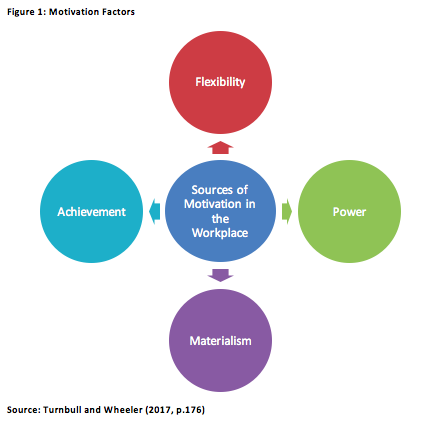 While some of these incentives are extrinsic and associated with payment and other material drivers, the remaining ones are intangible and may include the capability to organise individual and flexible work schedules, be recognised by other employees or select specific incentives (Taylor, 2017). These findings suggest that creativity antecedents can be viewed within the Herzberg’s motivation-hygiene theory.

Bratnicka (2015) linked organisational and leadership-based incentives and suggested such drivers as identification with the team, innovative climate, the distance of authority, autonomy at work, two-way communication, close supervision, social identification with executives and the encouragement of innovation in general. Hence, empowerment and creativity stimulation can be viewed as the positive factors associated with both the selected leadership style and specific motivators provided by organisations. The study of 326 companies in Poland conducted by Ingram (2016) discovered that creative activities effectiveness was highly dependent on the existence of supportive organisational climate. If the internal environment was positive, the effectiveness of talent management substantially increased, which also improved organisational performance. However, these findings may not be applicable to the UK context because of both cultural and business differences.

It can be suggested that the need for creativity presently exists in all organisations (Ali Taha et al., 2016). According to the traditional standpoint popular in the 1950s and 1960s, this factor is relevant only to major corporations operating in technology-intensive industries or advertising. However, modern customers expect creativity and innovation from all companies and products (Becattini et al., 2017). This element can lead to sustainable financial success, increased adjustability and adaptability, which suggests its potential relevance to British retail SMEs. It should be noted that the realisation of the creative potential of UK organisations can be facilitated or limited by their structural choices, leadership practices, knowledge management effectiveness, resource allocation and managerial attitudes (Blomberg et al., 2017).

The analysis of UK organisations performed by Goldman Sachs (2015) revealed that creativity and innovation were associated with a 70% contribution to the long-term economic growth and a 51% employee productivity increase at both the company and national levels. However, British SMEs, which occupied the 14th position in the overall rating including 34 states, were less innovative than those of other European Union countries (Goldman Sachs, 2015). The study of Perkins et al. (2017) performed in England discovered that the analysed SMEs were influenced by such factors as the perceived ‘distance’ between regular employees and their leaders, job role limitations and the discrepancies between the strategic vision of their organisations and their everyday activities. Hence, better organisational effectiveness could be achieved by more inclusive leadership practices that involved empowerment and delegation as well as the explanation of company strategies and potential benefits from creative ideas relevant to their implementation.

Turnbull and Wheeler (2017) analysed UK SMEs in the advertising industry within the scope of creativity involvement into the product development process. It was discovered that this factor was linked to the task identification stage as the smaller size of these companies allowed leaders and managers to communicate the role and objectives of each project to individual performers. Afterwards, the generated responses were validated and confirmed or discarded (Turnbull and Wheeler, 2017). It should be critically remarked, however, that the focus on a creativity-intensive industry can make these schemes inapplicable to all UK SMEs.

In turn, the evidence collected from UK SMEs by Henry (2013) revealed the generally positive attitudes towards the quality of innovative climate and the effectiveness of knowledge management in analysed organisations. At the same time, they criticised the resource-based constraints associated with the financial crisis that decreased the capability of these companies to implement creative ideas. Lee et al. (2015) also acknowledged the negative effect of external pressures such as crises on organisational creativity. Overall, the firms studied by Henry (2013) stimulated creativity by finding the right balance between the relational capital associated with leadership and managerial practices, the human capital in the form of talented employees and the structural capital represented by knowledge management and organisational climate.

The analysis of 10,000 retail SMEs in the UK context suggested that innovative British organisations were severely limited in terms of available credit resources due to the consequences of the 2008 financial crisis (Lee et al., 2015). This is highly concerning within the scope of the findings of Blomberg et al. (2017) because this fact indicates that the creative potential of these companies is underutilised. The problem is especially significant for new and small-sized organisations that may experience a lack of funds to develop the ideas suggested by their staff members. At the same time, UK enterprises tend to rely on external support and advice instead of developing internal creative competencies (Mole et al., 2017). This is a troublesome indicator because such assistance is often ineffective and based on the generalised information that may not be applicable to new challenges. These considerations are confirmed by the evidence collected from UK technology-based companies, which confirms the general inefficiency of governmental attempts to stimulate creativity and innovation in small and medium companies (Brown and Mason, 2014). This means that internal creativity drivers can be more powerful and result in better organisational outcomes.

Finally, the analysis of 34,798 UK retail SMEs by Shehata et al. (2017) revealed that the changes in the composition of boards of directors were positively correlated with innovativeness and creativity. This effect can be explained by the greater readiness of new executives to see problematic situations from different standpoints and accept innovative ideas (Henry, 2013). However, micro-businesses and small firms are frequently limited by the lack of management succession. Hence, they have to adhere to the vision of a single leader for many years, which makes their perspective of innovation unidimensional.

The analysis of secondary studies suggests that UK SMEs are influenced by existing structural arrangements and managerial practices that stimulate or hinder creativity and innovation at the organisational level (Perkins et al., 2017). At the same time, the availability of financial assets required for the implementation of new ideas is another factor that limits the creative potential of companies in the studied context (Lee et al., 2015). This effect is largely determined by the consequences of the global financial crisis and other negative economic trends affecting British companies. It can be recommended that UK SMEs should focus on improving the climate quality and knowledge management effectiveness (Henry, 2013). This suggestion is substantiated by the relative inefficiency of innovative knowledge sources, which forces British companies to develop their talent pools and realise their internal creativity potential (Brown and Mason, 2014).