A Comparison of Organisational Culture Theories

The Cultural Web and the Types of Culture: Key Definitions and Criticisms

Johnson’s Cultural Web is a theoretically distinct framework that takes into account different cultural elements as key factors in shaping organisational culture (Johnson and Scholes, 1988, p.15). In this model, six cultural elements (e.g. power structures, organizational structures, control systems, stories, rituals and routines and symbols) are defined and serve as key determinants of the organisational culture and employees’ behaviour, reflecting the collective experience of organisations (Cooper et al., 2018, p.49). The main benefit of the model is in its simplicity on providing a clear picture of the cultural elements (Cooper et al., 2018, p.49). At the same time, the framework also attempted to include organisational entities (namely structure and control systems) into its interpretation of culture (Porkka, 2016, p.910). It remains to be seen whether these elements fit with the remaining components of the model (Porkka, 2016, p.910). The principles of the Cultural Web are presented in the following figure. 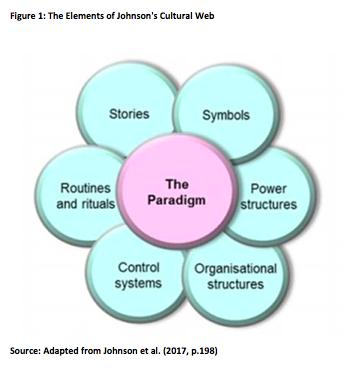 A major criticism of the Cultural Web model and its identification of the six elements is that these components may be not enough to truly understand and measure organisational culture (Cooper et al., 2018, p.49). This is because culture is intangible, making it impossible to measure its everyday operations and the way organisations manage certain departments (Cooper et al., 2018, p.49; Sun, 2008, p.139). Despite this, the model is widely used among researchers because its criteria are suitable for making an observation and acting as distinct units of analysis (Porkka, 2016, p.910). Organisations may use Johnson’s Cultural Web whenever they want to implement changes to the existing organisational structure. However, since the constituents of the Web are interdependent, such change programmes would need to be holistic and be guided by a strong strategic vision (Levovnik and Gerbec, 2018, p.119). This limits the applicability of Johnson’s Cultural Web to real-life problems for both academics and businesses.

In contrast to Johnson and Scholes (1988, p.15), Deal and Kennedy (1982, p.56) measured organisations based on the level of feedback and the respective level of risk. The scholars identified four types of culture, namely Tough Guy Macho, Work Hard/Play Hard, Process and Bet-Your-Company culture (Cacciattolo, 2014, p.6). The differences between these categories are highlighted in the following figure. 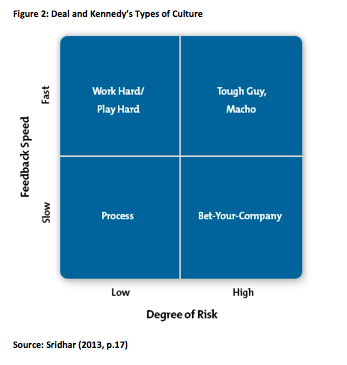 The ability to attribute an organisation to one of the four distinct categories was the main advantage of the theory proposed by Deal and Kennedy (1982, p.56). At the same time, the environment in which a company is established has the biggest impact on the type of culture that should be implemented to achieve success (Maximini, 2015, p.13). In other words, there are no companies following a single culture type. In complex organisations, there often exists a mixture of sub-cultures, which makes it possible to combine the most suitable characteristics of each culture (Cacciattolo, 2014, p.6). Nonetheless, the feasibility of this approach remains unknown. Another criticism of the above ideas is that the scholars did not consider the interplay of social networks and organisational hierarchies, which could also determine culture aside from the external environmental influences (Maximini, 2015, p.13).  The key implication of these findings is that the explanatory power of the Types of Culture is limited which would, in turn, lower its empirical validity.

Empirical Analysis of the Cultural Web and the Types of Culture

This section compares the extant empirical knowledge with the theories defined above. Holagh et al. (2014, p.213) suggested one relevant example by focusing on creativity and organisational commitment. Their ideas are represented as follows. 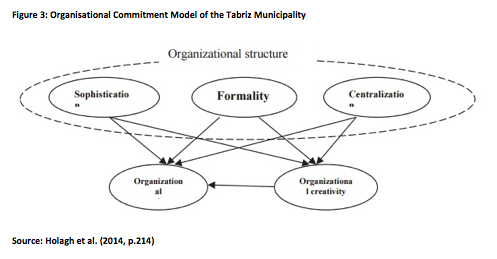 The results confirmed a positive relationship between organisational culture, and organisational creativity and commitment within the Tabriz municipality (Holagh et al., 2014, p.214). Establishing strong organisational culture by allowing participation of employees in the decision-making processes, creating effective reward systems or eliminating job obstacles would lead to an increase in organisational creativity and employees’ commitment (Holagh et al., 2014, p.215). These findings lent support to the Cultural Web by highlighting the importance of control systems, and routines and rituals (Johnson and Scholes, 1988, p.15). At the same time, it was difficult to attribute the outcomes of the study to the Types of Culture, meaning that the four categories were insufficient to fully analyse the Tabriz case (Deal and Kennedy, 1982, p.56).

A contrasting point could be made by relying on the work of Iljins et al. (2015, p.944) who focused on the role of culture in organisational change climates. As shown in the following figure, the framework created by the authors went beyond both the Cultural Web and the Types of Culture. 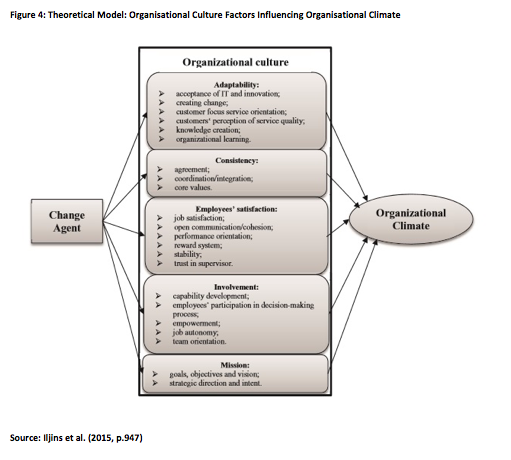 The above was reinforced further by Rijal (2016, p.127) when investigating organisational learning. This practice had to be supported by transformational leadership which was consistent with the importance of control systems illustrated by Johnson and Scholes (1988, p.15). At the same time, the authors failed to account for situations in which learning was not a priority for organisations such as financial crises (Rijal, 2016, p.127). This meant that the Types of Culture also played a positive role by allowing cultural and strategic flexibility (Deal and Kennedy, 1982, p.56). Analogously, Ojo (2016, p.1) linked organisational culture to business performance and noted that employee cultural commitment was a vital component of this relationship. In this case, the Types of Culture could be used for strategic guidance, while the Cultural Web would be more suitable for making changes in the specific organisational practices.

The Cultural Web framework focused on the elements of culture, while the Types of Culture model distinguished between four rigid categories. Despite these differences, the essay demonstrated that these models could be used as complementary. In spite of their age, the ideas possessed a medium level of empirical validity. The Cultural Web was more useful to change managers and businesses aiming to boost their learning. In contrast, the Types of Culture could be employed as guidelines for cultural decision-making. At the same time, the development of more expansive and up-to-date frameworks could benefit both the academics and business practitioners.

Holagh, S., Noubar, H. and Bahador, B. (2014) “The effect of organizational structure on organizational creativity and commitment within the Iranian municipalities”, Procedia- Social and Behavioural Sciences, 156 (1), pp. 213-215.

Rijal, S. (2016) “The influence of transformational leadership and organizational culture on learning organization: A comparative analysis of the IT sector”, Journal of Administrative and Business Studies, 72 (1), pp. 121-129.

We use cookies to ensure that we give you the best experience on our website. If you continue to use this site we will assume that you are happy with it.Ok