The smartphone industry has the reputation of being highly innovative and concentrated (Cecere et al., 2015). In 2017, a combined share of 62.5% of the global smartphone market was controlled by four largest companies (Reisinger, 2017). The purpose of this report is to determine the extent to which the dominant position of incremental smartphone brands was shaped by their innovativeness. The focus of this investigation is on Samsung and Apple as the two leading smartphone manufacturers worldwide (Reisinger, 2017). Only secondary evidence from peer-reviewed articles and reputable media was collected for this inquiry.

Innovation and Customer Loyalty in Samsung and Apple

Samsung and Apple jointly accounted for 43% of the global smartphone sales in 2017, despite the increasing competition from the dynamically developing Chinese brands (see Figure 1). 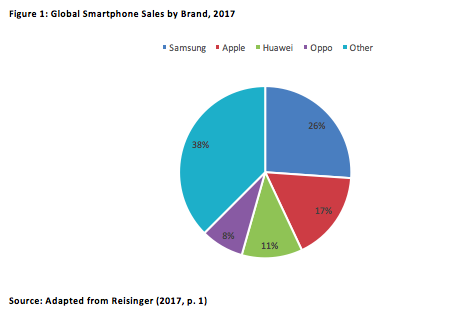 As shown above, Samsung’s market share was almost twice as large as Apple’s (Reisinger, 2017). Besides, Samsung was a more innovative brand according to the results of the 2017 Global Innovation 1000 study (see Table 1).

As shown above, both companies ranked among the top ten most innovative businesses globally, but Samsung’s innovation spending was considerably higher, despite its revenues being smaller than Apple’s. Research and development (R&D) spending comprised 7.6% of Samsung’s revenues in 2017. For Apple, this ratio was 4.7% (PwC, 2017). This gap could have resulted from Samsung’s investing more heavily in the development of its new Galaxy S8 product line, while Apple announced only modest improvements in its next model (Reisinger, 2017). Moreover, Samsung has been known as the top innovator in the industry for over a decade, releasing on average 26.5 new products per year, which is the greatest figure among all major smartphone manufacturers (Cecere et al., 2015). From this data, one can conclude that new product development (NPD) is a priority direction of Samsung’s investments.

The customer loyalty for both Apple and Samsung in the US market was exceptionally high at about 90%, according to the results of the 2016 survey by Reuters and Ipsos (see Figure 2). Thus, the gap in innovation spending between the two companies did not produce a matching gap in brand loyalty. 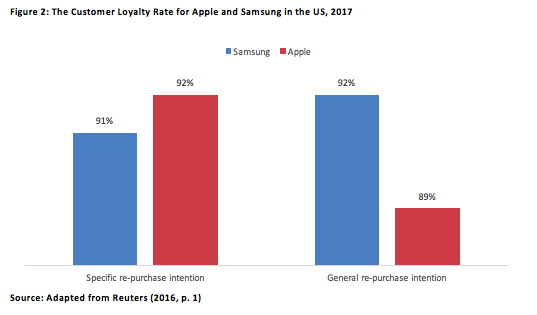 As shown above, the specific re-purchase intention for Samsung’s smartphones was by 1% smaller than for Apple’s, which could have resulted from the adverse impact of the Galaxy Note 7 scandal (Reuters, 2016). Meanwhile, the general re-purchase intention for Samsung’s products was by 3% higher than for Apple’s, indicating a considerable and resilient customer trust in the Samsung brand. These results are highly reliable as they were based on a poll of 2,375 Samsung phone owners and 3,158 iPhone owners (Reuters, 2016). However, other components of brand loyalty, such as positive word-of-mouth, were not assessed by this survey.

Contradictorily, the brand loyalty for Samsung’s products in the fast-growing Chinese market was significantly lower than for Apple’s. Only 7.2% of the customers surveyed by the Korea International Trade Association (KITA) were willing to repurchase their Samsung smartphone, while for Apple this figure was 53.4% (Yonhap, 2017). These findings suggest that higher innovativeness cannot guarantee customer loyalty in the smartphone market. The direct and indirect effects of innovation on customer loyalty are examined in greater detail in the next sections.

A particular kind of innovation that can boost the company’s market share and create a loyal customer base is the development of a new product addressing an important customer need that has been overlooked by the market leaders. One example is the historical case of Nokia’s winning a 31% market share from Motorola over two years by introducing the mobile phones that responded to the customer need of cultivating social relationships (Vecchiato, 2017). Nokia’s ‘candybar’ design was created with the purpose of facilitating user communication, unlike Motorola’s ‘clamshell’ design that focused on productivity and efficiency (Vecchiato, 2017). Similarly, Apple prevailed over Nokia in the early 2010s by offering a more aesthetically pleasing design, which responded to the users’ need of self-expression (Al-Debei et al., 2015). Between 2008 and 2012, Apple’s share of the smartphone market increased from 10% to 25%, while Nokia’s declined from 39% to less than 5% (see Figure 3). The large market share being retained by Apple in the subsequent years can be used as an indirect measure of customer loyalty, along with the customer surveys measuring re-purchase intention for iPhones and other Apple’s products (Reuters, 2016; Yonhap, 2017). This evidence indicates that NPD can produce a strong, positive and resilient effect on market share and customer loyalty in the smartphone industry. The drawback of customer-focused NPD is that the unaddressed consumer needs might be challenging to reveal and satisfy with the company’s available resources (Vecchiato, 2017). Thus, the development of such products involves a high degree of uncertainty and considerable risk. 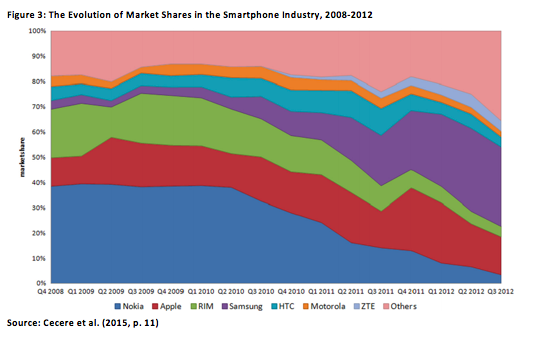 A less risky and more diversified NPD strategy was adopted by Samsung. For more than a decade, this company remained the smartphone industry leader by the number of new product launches per year, which reached 26.5 (Cecere et al., 2015). The rapid increase of Samsung’s market share, from 8% to 32%, occurred between 2010 and 2013 (Mallinson, 2015). Today, Samsung retains 26.1% of the global smartphone market (Reisinger, 2017) and its customer loyalty levels are on par with Apple’s, exceeding 90% in the US (Reuters, 2016). From this evidence, one can conclude that the two completely different NPD strategies adopted by Samsung and Apple produced similar outcomes in terms of customer loyalty. While Apple focused on introducing new cutting-edge models in a few product lines over considerable time intervals, Samsung released a variety of new products at a high frequency rate (Cecere et al., 2015). This degree of diversification made Samsung’s NPD strategy more resilient as the failure of any single model, e. g. Galaxy Note 7, was mitigated by the customer appreciation of other new products (Reuters, 2016). The limitation of Samsung’s diversified innovation approach is that it is extremely resource-consuming and, hence, hardly feasible to new entrant in the industry. It was Samsung’s already established business across a variety of consumer electronics segments that enabled this company to deliver new smartphone products faster than any major rival.

The indirect effects of innovation on customer loyalty in the smartphone industry have been extensively studied in the research literature. A successful NPD generally results in enhanced product quality, and quality has been established as the major predictor of smartphone brand loyalty across a number of studies (Kim et al., 2016; Shin, 2015; Yeh et al., 2016). The relationship between quality and loyalty can be mediated by customer satisfaction (Kim et al., 2016; Shin, 2015), confirmation of expectations (Lin et al., 2015) or perceived functional value (Yeh et al., 2016). However, there is also evidence that not all components of quality may be equally important for enforcing customer loyalty. In Kim’s et al. (2015) study on a sample of 229 smartphone users, the only two aspects producing a significant effect on continuance intention were network quality and customer support quality. System quality, which is the main focus of NPD, did not significantly influence continuance intention (Kim et al., 2015). When the path analysis was run separately on the samples of Android and iOS users, network quality remained the only significant contributor to customer loyalty (see Appendix). All participants of Kim’s et al. (2015) research project were recruited in South Korea, which is a caution against generalising the findings to other countries. Another significant limitation is that the sample was biased towards the 19-25 age group, which accounted for 69.9% of the respondents.

The effect of NPD on customer loyalty through brand equity is even less consistent. Although there is evidence that the perceived innovation capability positively affects the smartphone brand reputation in the cases of Samsung and Apple (Kim, 2016), the investigation by Atashfaraz and Abadi (2016) found no significant impact of innovation on brand equity in a sample of 384 Samsung smartphone users in Iran. These findings are culturally bound and cannot be extrapolated to other markets, such as the UK, the US or China. Future research is needed to establish how the relationship between NPD and loyalty is mediated by brand equity across the multiple geographic markets of the global smartphone brands.

High NPD investment enables new entrants in the smartphone market to identify customer needs that were overlooked by major players and suggest a product that satisfies them. Although involving high risks, this strategy can result in gaining a substantial market share and building a loyal customer base over a short period of time as it occurred in the case of Apple (Al-Debei et al., 2015). Another way to achieve strong and resilient customer loyalty is to frequently release less sophisticated, but more diversified products. This approach is consistently followed by Samsung (Cecere et al., 2015), yet it cannot be recommended to new entrants with constrained financial resources. Overall, the relationship between NPD investment and customer loyalty in the smartphone industry is far from straightforward and can vary considerably across geographic markets. 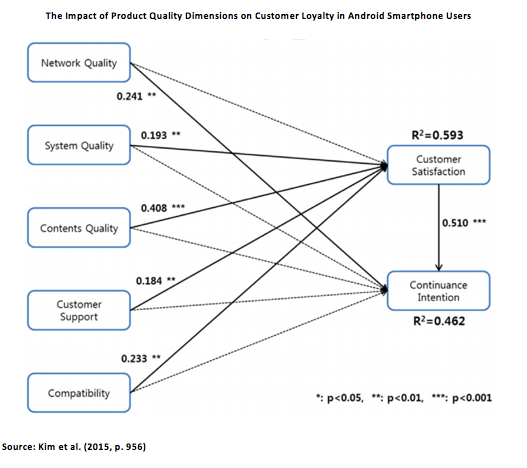 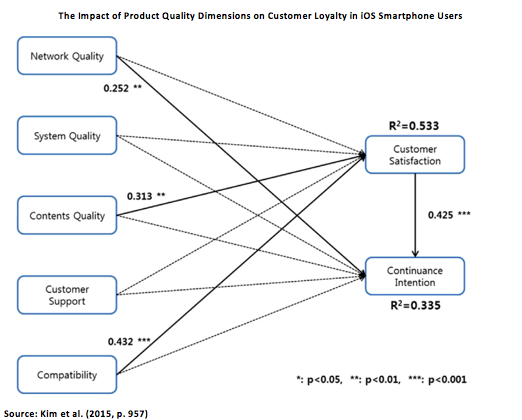