Sample Essay: Comparison of UK and US Industrial and Commercial Productivity

Productivity in the UK and US 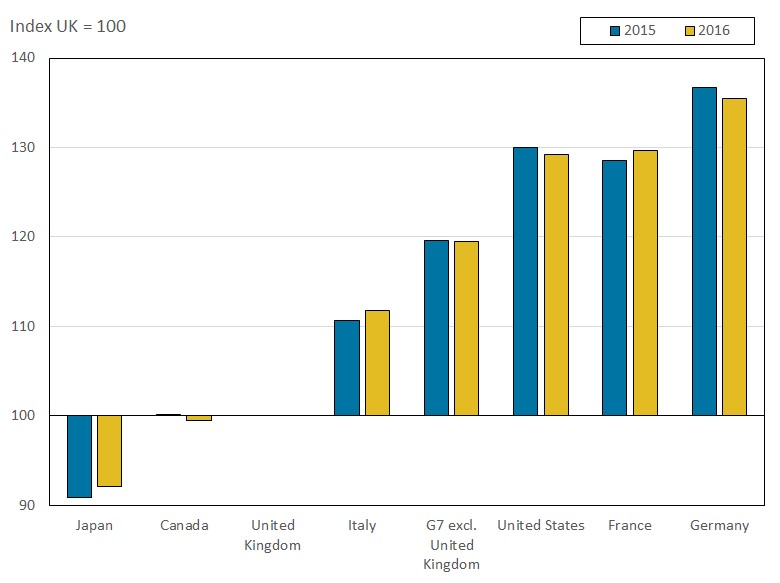 As can be seen, the UK is about 20% behind the G7 average. The country is significantly behind the US as the gap is about 30%, which means that the US GDP per hour worked is 30% higher compared to the UK.

According to Greasley and Oxley (1998), American leadership in technology development was responsible for the superiority of the US industrial sector compared to the UK. The authors found evidence in favour of segmented convergence between the countries for GDP per capita and real wages. However, the gap in the industrial output per workers is nonstationary and divergent since 1870 (Greasley and Oxley, 1998). The gap in industrial productivity can be linked to the IT sector and the boom in the US during the 1990s. Stiroh (2002) examined the linkage between the technological sector and resurgence in the US productivity in the late 1990s. The results indicate that the IT sector was the key driver of the country’s surge in productivity. However, the rest of the economy that has no relation to the IT did not show substantial improvements in productivity growth (Stiroh, 2002). This surge in the technological sector in the US can be the key cause of the productivity gap between the countries. This relates to the Solow paradox as the UK also experienced a boom in the information technologies that had to result in the productivity growth. According to Basu et al. (2003), there was information and communication technology (ICT) boom in the 1990s in the UK, but its total factor productivity (TFP) declined. Basu et al. (2003) suggest that ICT as a general purpose technology (GPT) can explain this paradox. The lagged investment in ICT in the 1990s in the UK could bring more productivity growth in the future for the UK economy as the US benefited from the spike in ICT investment during the 1980s.

The UK economy has lower productivity compared to the rest of the G7 countries and the US, particularly. The start of the productivity gap dates back to the 1990s in the period of investment in ICT and rapid growth of the technology sector. This gap can be explained by a combination of cyclical and persistent factors such as barriers to efficient capital allocation and weak growth in energy and finance sectors.

Basu, S., Fernald, J. G., Oulton, N. and Srinivasan, S. (2003) The case of the missing productivity growth, or does information technology explain why productivity accelerated in the United States but not in the United Kingdom? NBER Macroeconomics Annual, 18, pp. 9-63.