Overview of the Egyptian Israeli Conflict

In 1882, Jewish immigration and targeted land purchases in the area later called the State of Palestine marked the beginning of a long-lasting conflict between the Arab countries and Israel. While the existing body of research provides deep insight into the Arab-Israel conflict, there is no agreement on whether Egypt played a key role in it (Aly et al., 2013). One the one hand, Egypt is often considered as one of the most implacable enemies of Israel in its struggle for independence and recognition (Mahler and Mahler, 2010). On the other hand, Egypt has proven itself to be the main advocate of continued peace between Israel and the Arab states (Tessler, 2009). The main purpose of this essay is to critically appraise the role Egypt played in the conflict between the Arabs and Jews by over-viewing its main phases and outcomes for both parties.

The Arab-Israeli conflict entered its active phase in 1948 when the Jews in Palestine declared to the world the existence of the State of Israel (Oren, 1989). In response to this action, Egypt, Syria, and Jordan collaboratively began an invasion in their attempt to ‘drive Israel into the sea’ (Bickerton, 2012). Only two years later, in April of 1949, the conflicting sides reached an armistice, according to which Israel was awarded new territories and the West Bank was given under control of Jordan (Aly et al., 2013). Finally, the area between Egypt and Israel commonly known as the Gaza Strip was given to the former. However, a new war between Israel and Egypt was just a matter of time because of the growing political tension between the conflict parties (Tessler, 2009).

In 1950, Israel’s Parliament adopted the Law of Return, which provided special citizenship rights to Jews outside Israel (Oren, 1989). Specifically, this law declared that Israel is home to all Jews regardless of their current residential status or citizenship. In response to this act, Egypt formed a pact of mutual defence with Syria and Jordan in 1956 (Mahler and Mahler, 2010). In addition, Egypt closed the Suez Canal to weaken Israel’s shipping traffic. This action also negatively affected the economy of the UK and France, which were amongst the countries that later invaded Egypt. In accordance with Aly et al. (2013), the closure of the Suez Canal by Egypt was the main reason why Israel allied with the UK and France. Indeed, throughout 1955-1956, Egypt’s government issued a number of regulations and policies, which frustrated the UK’s economic and political aims throughout the Middle East (Sela, 2012). At the same time, the establishment of closer and more favourable relations between Egypt and the Soviet Union could also trigger the Suez Conflict (Bickerton, 2012). While pressure from the US forced the UK, France, and Israel to withdraw from the armed conflict, Egypt mistakenly considered itself as the winner. As a result, many Egyptians saw their leader, Gamal Abdel Nasser, as the conqueror of Zionism and European colonialism (Mahler and Mahler, 2010).

The Six-Day War was the third military confrontation between Egypt and Israel that occurred between 5 and 10 June 1967 (Kurtulus, 2007). While each party had its own agenda, there is still no agreement amongst scholars on what side caused the war. Some scholars argue that the war was started by Israel as a response to Egypt’s aggression (Schulze, 2016). Despite the peace agreement between the conflicting parties achieved in 1956, Israeli settlements were often attacked by Syrians, Egyptians, and Jordanians. Israel responded to these strikes, which quickly resulted in an escalating cycle of grievances between Egypt and Israel (Mahler and Mahler, 2010). Furthermore, at the beginning of 1967, the former ordered the United Nations (UN) to leave the buffer zone with Israel. Given that the UN could only maintain its peacekeeping forces if both Egypt and Israel wanted their presence, the organisation had no other choice but to withdraw (Abu-Qarn and Abu-Bader, 2009).

Other historians claim that it was Egypt who started the war (Aly et al., 2013; Karsh, 2017). One of the outcomes of the Suez Crisis was Israel’s position that the closure of the Straits of Titan to its vessels would be considered as an act of aggression and would be a cause for war (Kurtulus, 2007.). However, in 1967, Egypt announced that the Straits of Titan would be closed to Israel ships. In turn, Israel launched a series of pre-emptive airstrikes against Egypt (Schulze, 2016). Regardless of what side of conflict caused the war, it lasted only six days. As a result, Israel found itself in control of many new territories, including the Gaza Strip, the West Bank, Syria’s Golan Heights, and the Sinai. 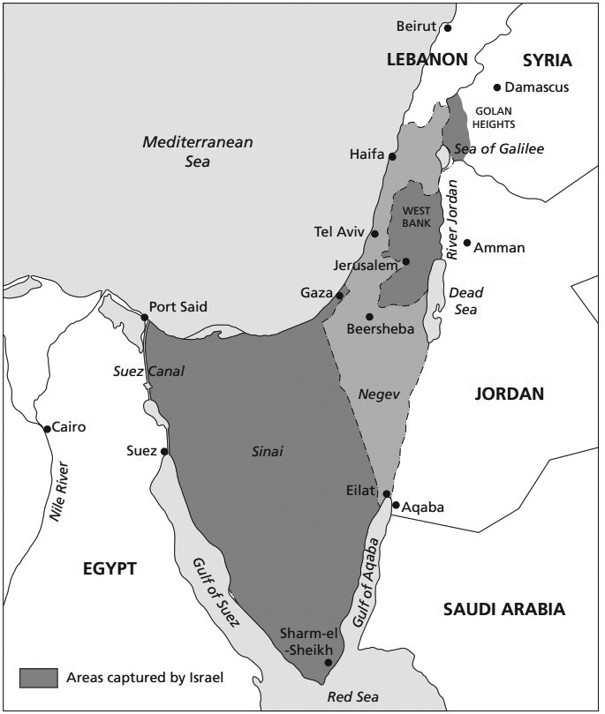 Despite this impressive defeat, none of Israel’s neighbours, including Egypt was satisfied with the post-war status quo. In addition, both Egypt and Israel had become involved in the Cold War between the Soviet Union and the US. As previously noted in this essay, Egypt had been friendly to the interest of the USSR, while Israel found an eager sponsor in the US (Sicherman, 2011).

The War of Attrition and October War

Following the Six-Day War, neither Egypt nor Israel took serious diplomatic efforts to resolve the problems at the heart of the conflict between the states. Egypt considered Israel an occupant and wanted it to fully withdraw from the Sinai. In 1967, in its attempt to achieve this aim, Egypt and other Arab states formulated the so-called ‘three no’s’ policy, according to which the country refused to recognise Israel as a state, negotiate, and establish peace with it (Simpson, 2015). Two years later, Egypt judged itself prepared to attack Israel and proclaimed the official launch of the War of Attrition. However, Egypt overestimated its power and the war ended in August 1970 without any significant changes to the frontiers and no real commitment to peace negotiations (Reuveny, 2003). Some scholars believe that Israel was much more prepared for war, which is partly explained by its victory in the previous war with Egypt (Mahler and Mahler, 2010). Hence, Egypt had no real chance to re-gain control over the Sinai Peninsula (Bickerton, 2012). Other scholars express an opinion that the War of Attrition was de-escalated by Washington in an attempt to avoid a full-scale armed conflict with the USSR (Simpson, 2015).

The October or Yom Kippur War was the culmination in the Egyptian Israeli conflict. Once again, Egypt created a coalition with Syria and fought against Israel. Egypt wanted to re-gain control over the Sinai, while Israel’s primary objective was to seize a foothold on the east bank of the Suez Canal and return the rest of the peninsula (Bartal, 2015). Egypt and Syria attacked Israel on October 6 1973, the Jewish Day of Atonement. As a result, the Israeli army was especially vulnerable to Egypt’s attack, which allowed for re-taking the Sinai, while Syria was able to re-take the Golan Heights (Abu-Qarn and Abu-Bader, 2009). Nevertheless, Israel eventually managed to re-group its military forces and pushed Egypt and Syria back. The conflict known by Arabs as the October War and by Israelis as the Yom Kippur War clearly demonstrated that the balance of power in the region had shifted in favour of Israel.

In 1977, Egypt’s president reached out to Israel’s government and suggested its willingness to discuss a peace agreement (Sela, 2012). This action, which had been unthinkable only a few years earlier, marked the beginning of a new era of Egypt-Israel relations. However, the negotiations were not very successful since the parties could not agree on certain aspects of the peace agreement. Israel wanted a schedule of a phased withdrawal from the occupied land, preceded by full and immediate recognition of the State of Israel by Egypt (Bartal, 2015). On the contrary, Egypt offered a schedule of phases of recognition, justified by Israel’s withdrawal in a very short period. The issue of settlements was also very touchy to both parties. To resolve this issue and develop a final document of Egyptian-Israeli understanding, the US stepped up and invited the leaders of both countries to the Presidential retreat at Camp David (Mahler and Mahler, 2010). In 1978, the Camp David Accords were finally signed by Israel and Egypt, which marked the end of the prolonged conflict between the countries (Abu-Qarn and Abu-Bader, 2009).

For more than a century, the conflict between the Jewish and Arabs remains an issue of concern for many academic scholars and researchers (Reuveny, 2003). The state of war between the countries dates back to 1948 when the Jews in Palestine declared to the international community the existence of their own state (Oren, 1989). In turn, the Yom Kippur War or the October War marked the culmination in the prolonged armed conflict between Egypt and Israel (Bartal, 2015). As a result of this war, Egypt was unable to re-gain control over the Sinai Peninsula, while Israel clearly demonstrated its dominance in the region. The Camp David Accords signed in 1978 provided both countries with an opportunity to revive diplomatic talks and exist in peace and agreement with each other.

Bickerton, I. (2012) The Arab-Israeli Conflict: A Guide for the Perplexed, London: A&C Black.

Sela, A. (2012) Decline of the Arab-Israeli Conflict: Middle East Politics and the Quest for Regional Order, New York: SUNY Press.