Overcoming resistance to change at Microsoft

Contemporary organisations have to face the necessity to undergo changes to adapt to the rapidly changing external environment and new market trends (Al-Haddad and Kotnour, 2015). These transformations can sometimes be involuntary and involve extensive internal restructuring and employee layoffs. These activities often create resistance to change from the personnel that substantially decreases the overall change effectiveness and increases associated costs. Microsoft had to start a massive transformational initiative in 2014 caused by the need to address the market demand for cloud technologies, its ‘organisational ageing’ and the loss of its original innovative culture (Bort, 2014a; 2014b). The aim of this essay is to analyse the resistance factors existing within the company and the ways it can mitigate their negative impact.

Microsoft had to lay off as many as 13,000 employees in 2014 due to the organisational change devised by the company CEO (Bort, 2014a). This situation worried the rest of the staff members as no advance warning was issued and these contract terminations were not stated as final. The scope of the suggested transformation was substantial and involved multiple long-term adjustments of the strategic course such as the staff reduction in the recently acquired Nokia company (Khan et al., 2017). The company was purchased by Microsoft to retain its manufacturing base for new Windows phones as the Finnish organisation had been considering a new contract with Android smartphones manufacturers. At the same time, a large share of the Nokia business was of no use for the acquirer, which resulted in the need to get rid of numerous departments and lay off as many as 12,500 employees in 2014. Overall, the problems of Microsoft included the lack of innovativeness in its new solutions during the 2000s as well as its controversial success in the mobile devices market (Heffernan, 2016). The radical transformational change introduced by the current CEO resulted in positive financial outcomes and the successful expansion into the previously omitted cloud technologies market. Microsoft also received appraisals from its primary competitors including Apple.

It should be noted that the activities initiated by Satya Nadella were generally supported by the majority of the employees (Bort, 2014b). The reason for that was the need to reduce the bureaucracy of the ‘single structure organisation’ introduced by the previous management team. This approach hindered the development of new products and severely limited the productivity of individual teams. For example, the cloud software development team issuing new programme updates on a daily basis was regulated by the same principles and procedures as the Windows unit working on long-term projects. The negative outcomes were balanced by the fact that a large number of employees recognised the expertise of Satya Nadella and viewed this person as both a competent business leader and an innovator (Nusca, 2016). These people were ready to accept the pitfalls of the transformational process because they realised the severity of existing problems and understood that severe measures were required to mitigate them. They also believed that the person initiating the transformation was competent enough to maintain the right course.

An important aspect of the change in Microsoft was associated with the fact that the company was originally a revolutionary innovator that reportedly lost some of this innovative edge during the term of its second CEO (Rushe, 2014). Hence, the initiated transformation was a restoration of the original culture. The change initiator was the head of the cloud computing division that developed multiple innovative solutions that form the core of the current Microsoft product range. While this direction is viewed as critical by a large number of employees, the vision of the CEO could be limited by the personal experience in this sphere and may not be shared by some Microsoft staff resisting this change (Bass, 2016). Therefore, Microsoft and its CEO need to decrease the degree of resistance and negative expectations in order to successfully complete the ongoing change and restore the original innovativeness of Microsoft.

3. The Ways to Overcome Resistance to Change

Employee resistance to change is viewed differently by various theories (Burnes, 2015). On the one hand, employees with negative views can reveal the problems that were not predicted and anticipated by the original plan, which can be beneficial for updating its contents and improving its efficiency. On the other hand, their resistance can substantially hinder the implementation of the planned measures and increase overall organisational expenses. One of the first studies in this field was performed by Coch and French (1948) who discovered that negative effects could be mitigated to a large degree by openly communicating with employees about the need for change, it’s possible directions and the ways employees and managers could cooperate to achieve positive outcomes for everyone. In the case of Microsoft, the attitudes towards the change were controversial as some employees had not been aware of the change necessity and had not been ready for its negative outcomes (Bort, 2014a; 2014b). Due to these miscommunication issues, many staff members were shocked by this change and therefore may create substantial resistance and negative word-of-mouth in the future. Therefore, the importance of communication must be accounted for in the preparation for the next change steps. A summary of the most relevant empirical findings on the issue of employee resistance to organisational change can be found in the Appendix.

The type of change initiated by Microsoft can be classified as a transformational change (Zafar and Naveed, 2014). Such activities usually include cultural and structural transformations. A cultural change is very difficult to implement due to its intangible nature and the need to modify thoughts, beliefs and assumption. On the contrary, structural rearrangements are easier to accomplish, which is supported by the fact that the analysed company prioritised this dimension (Bort, 2014b). Hence, it can be suggested that the most problematic aspect of Microsoft transformation is the cultural change. Resistive behaviours can take the form of open criticism, reversion to old practices, delays and procrastination, reluctant compliance, negative word-of-mouth or even self-termination from the organisation (Lines et al., 2015). While some of these types of activities can be easier to recognise and address, others are often hidden from the management, especially in the cases when expressing opinions may result in negative outcomes for disagreeing employees.

Microsoft has already passed the unfreeze stage and is currently in the change phase. This theory suggests that the assistance of employees is critical for the success of organisational transformations. This internal support can be obtained by leading effective communication with staff members to account for their opinions. This is necessary to prevent negative rumours and to explain the reasons for the planned changes, which requires time. In the case of Microsoft, the majority of laid off and remaining employees had little information about the planned transformation and its scope (Khan et al., 2017). From the standpoint of the Leading Change model (Kotter, 1996), the CEO managed to establish a sense of urgency, but did not form a unified coalition to guide the organisation through the change process. While the vision about the new direction was communicated to the employees and external stakeholders, it can be suggested that the involvement of staff members could be improved through planning additional short-term incentives and empowering individual employees and managers (Al-Haddad and Kotnour, 2015).

In the case of Microsoft, it can be beneficial to improve the quality and transparency of communication with employees to avoid potential misunderstanding (Lines et al., 2015). This way, the individuals who can be laid off in the future will have time to find new positions and the remaining specialists will not leave the company due to the growing uncertainty and concerns. At the same time, resistance can take place at individual or collective levels (Muo, 2014). The second type is substantially more dangerous for organisations as the scope of negative outcomes is larger and the ‘loss’ of organisational departments and units can hinder the implementation of the planned transformation. Additionally, the lack of attention to the growth of dissatisfaction frequently results in employee cynicism (Grama and Todericiu, 2016). Therefore, Microsoft should promote the open-door policy by offering anonymous mechanisms to discuss the ongoing change and receive up-to-date information about its scope, potential consequences and plans for specific departments. This way, the company can promote organisational transparency and sincerity and avoid excessive staff resistance.

It can be concluded that Microsoft is undergoing a major transformation involving both structural and cultural changes that results in the growing resistance of some staff members (Zafar and Naveed, 2014). That said, the scope of existing controversies and misunderstanding is limited because the majority of employees share the sense of urgency and trust the organisational leader’s vision (Bort, 2014b). The resistance can be further decreased by improving the transparency of the transformation process. Microsoft needs to develop an open-door policy that would support direct communication and reduce the degree of uncertainty and employee concerns (Lines et al., 2015). Following this direction, the company can avoid organisational cynicism and mitigate negative reactions in the case of future staff layoffs (Coch and French, 1948; Grama and Todericiu, 2016).

Bort, J. (2014a) “Microsoft Employees In Seattle Are 'Shell Shocked' At The Size Of The Layoffs”, [online] Available at: http://www.businessinsider.com/microsoft-employees-are-shell-shocked-2014-7 [Accessed on 27 October 2017].

Bort, J. (2014b) “Despite Massive Layoffs Most Microsoft Employees Still Like Satya Nadella”, [online] Available at: http://www.businessinsider.com/microsoft-employees-still-like-nadella-2014-7 [Accessed on 27 October 2017]. 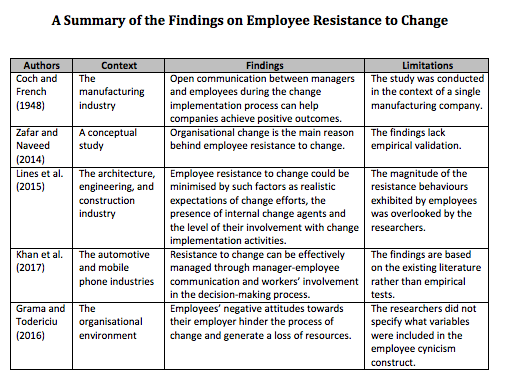