Light trapping has been used in many applications including photo-electrochemistry, photovoltaics, sensing, and production of solar fuel (Fonash, 2015). The present paper aims to provide an overview of the light-trapping properties of solar cells. Firstly, relevant optical phenomena are considered that may influence the design of solar cells. This includes interference, scattering, reflection, and diffraction. Secondly, major solar cell structure designs are described such as antireflection coating, randomly textured surfaces, and periodic arrays.

Light trapping can be used to increase the absorption in solar cells. Due to the transmission of light through the active layer of the solar cell, some of the energy of the incident light may be lost (Mokkapati and Catchpole, 2012). Light trapping allows for increasing the optical path length of light while keeping the physical thickness unchanged.

Interference refers to the phase difference between waves influencing the energy density at different places and times. Consider two plane electric field waves  and  with wave vectors  and , frequencies  and , and distances from wave sources  and , respectively. The total electromagnetic energy density  at a point depends on the square of the magnitude of the resulting electric field (Fonash, 2015):

Here,  is the permittivity. The expression shows that, even if both waves have the same frequency  and the same amplitude , the phase difference  may result in the energy density deviating from the average value of  by as much as . This effect can be used to reduce the reflectivity of silicon in solar cells. Adding a dielectric coating of thickness of one-quarter wavelength results in destructive interference of the wave reflected from the dielectric-semiconductor interface and the wave reflected from the top surface (Sprafke and Wehrspohn, 2012). 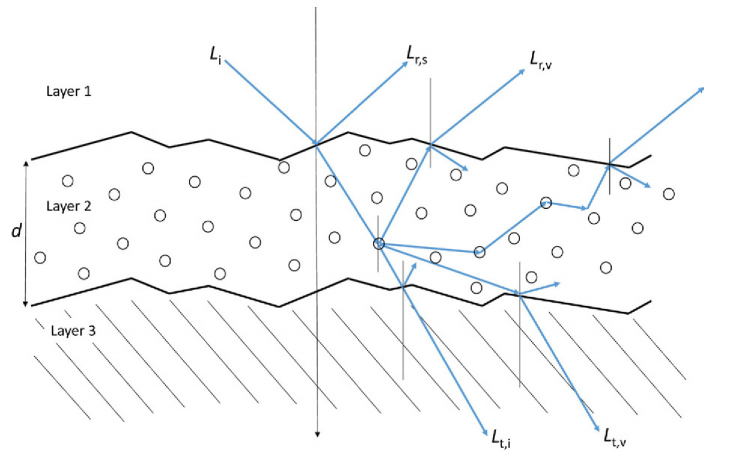 The figure illustrates how scattering may be used in solar cells in the context of diffuse reflection. Texturing the top interface leads to diffuse scattering of incident light. Randomised angular distribution of light rays allows for utilising total internal reflection in order to increase the optical path. Placing a planar mirror at the backside of the solar cell would further increase the probability of absorption (Sprafke and Wehrspohn, 2012). Assuming perfectly diffuse reflection at both the top and the bottom interfaces and a refraction index , the ratio of absorption to incoming intensity may be increased by a maximum factor of  which is called the Yablonovitch limit (Yu et al., 2010).

Diffraction is another phenomenon that may be utilised in solar cells. Consider a plane wave with a wave vector  which is incident on an interface with a period array (Figure 2).

Figure 2. Diffraction by a periodic array 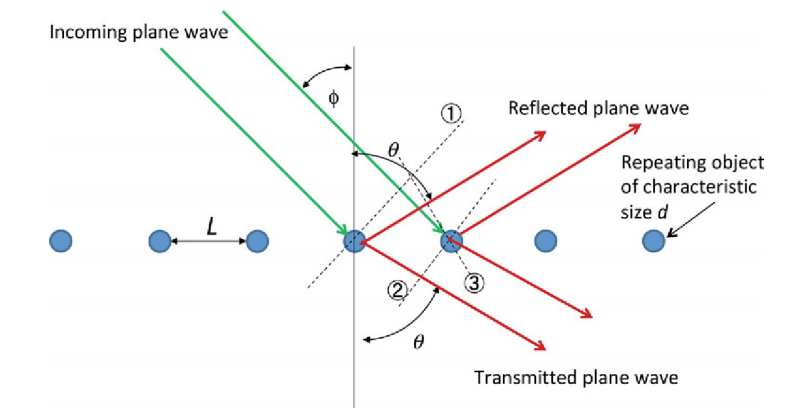 A similar equation governs the diffraction for transmitted plane waves with the refraction index :

The relation to light trapping in solar cells emerges when considering the component  of the wave vector that is parallel to the interface. Since this component equals ,  it can be rewritten as follows:

Put differently, scattering off a periodic array changes the component of the wave vector that is parallel to the interface by integer multiples of . In fact, even normal incidence may result in a non-zero  component. Thus, periodic gratings may enhance the absorption in solar cells as diffraction effectively changes the direction of incident light which allows for light trapping (Mokkapati and Catchpole, 2012). Similarly, refraction at the interface of air and the surface layer of the solar cell may result in a non-zero  component which is beneficial for light-trapping.

The optical phenomena discussed above can be used to improve the absorption properties of solar cells.

The active layer of a solar cell is typically made of semiconductor materials and therefore has a high refractive index (Sprafke and Wehrspohn, 2012). Consequently, a large amount of light may not even reach this layer as it would be reflected at the top surface (Müller et al., 2004). Assuming a wavelength of around 600 nanometres and normal incidence of light, the reflectivity of bare silicon approximately equals 35 percent (Sprafke and Wehrspohn, 2012).

The simplest design of a solar cell counters this effect by utilising antireflection (AR) coating. The coating takes the form of a dielectric layer with an optical length of one-quarter wavelength (Mokkapati and Catchpole, 2012). This design allows the light that is reflected from the interface between the dielectric and silicon to destructively interfere with the light that is reflected from the top AR surface. AR coating can reduce the reflectivity to zero for a particular wavelength (Figure 4).

Figure 3. Reflectivity as a function of wavelength for silicon single crystal materials

The figure illustrates the changes in reflectivity for a bare silicon single crystal material. Adding an AR coating results in a reduction in reflectivity for all wavelengths and minimises it at . However, the plot highlights the major shortcoming of this design. AR coating minimises light reflection only for a particular wavelength. While this can be remedied by considering multilayer AR coatings, this also maximises the outwards propagation of light at these wavelengths due to the symmetric operation of this design (Feng et al., 2007).

The phenomenon of total internal reflection allows for capturing light in a solar cell. Scattering structures of cells aim to maximise the amount of trapped modes with propagation angles that are greater than the angle of total internal reflection (Stuart and Hall, 1997). In particular, texturing the top and bottom interfaces of the solar cell leads to diffuse scattering of incident light. Random texturing results in a random distribution of angles for light rays that are entering the active layer (Sprafke and Wehrspohn, 2012). However, the relative improvement in reflectance is restricted by the Yablonovitch limit of  for a refractive index of the cell , although this limit assumes weak light absorption of the semiconductor and ideal diffuse scattering at the interface (Fonash, 2015).

The surface texture of black silicon (b-Si) has densely packed peaks and troughs of irregular height and shape and thus can be used in solar cells (Sprafke and Wehrspohn, 2012). The material exhibits strong diffuse scattering and suppression of reflectivity over a broad range of wavelengths (Figure 4). 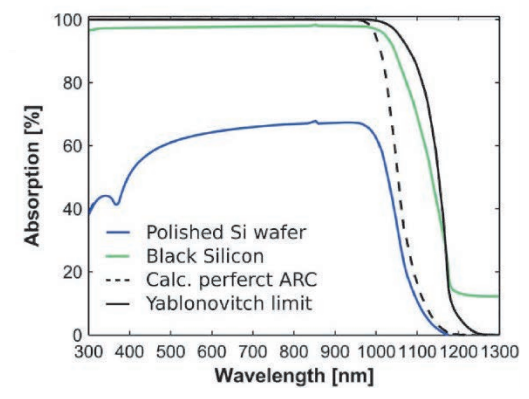 The figure illustrates the effectiveness of the random surface texture of b-Si at light trapping. At higher wavelengths the absorption of b-Si exceeds the absorption from a perfect AR coating. Furthermore, b-Si appears to be close to the theoretical Yablonovitch limit. Nevertheless, solar cells based on b-Si have several disadvantages. The lifetime of charge carriers is relatively low while the recombination velocities at the surface are high which limits the performance of such cells (Sprafke and Wehrspohn, 2012).

The ability of diffraction to change the direction of incident light is utilised in solar cells with periodic arrays (Zhao et al., 1999; Garnett and Yang, 2010). Figure 5 shows several designs of dielectric structures and gratings that may be used to improve the performance of solar cells. 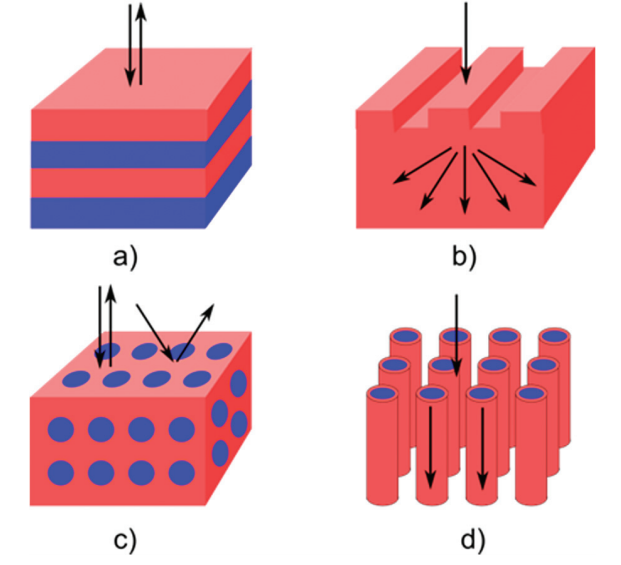 Figure 5(a) shows a one-dimensional Bragg reflector consisting of multiple dielectric layers which can be used to double the optical path length. A two-dimensional grating that enhances light trapping in the active layer of the solar cell is illustrated in Figure 5(b). Both Figure 5(c) and Figure 5(d) show three-dimensional photonic crystals that trap light through the waveguide effect.

A periodic array of dome-shaped cells may also be effective at light trapping (Figure 6).

The dome nanocrystalline silicon (nc-Si) structure outperforms cells with aluminium-doped zinc Oxide (AZO) coating, and its absorption is close to the Yablonovitch limit for a broad spectral range. Several gratings can be used simultaneously to further improve the absorption of a solar cell (Battaglia et al., 2012). The major shortcoming of periodic arrays is the trade-off between the enhancement of the optical path length and the angular response of the grating (Fonash, 2015).

The aim of the present paper was to provide an overview of the light-trapping properties of solar cells. Important optical phenomena related to the design of solar cells were discussed first. Interference may allow for reducing the reflectivity of the cell by adding an antireflective coating on the surface. Refraction may be utilised to trap incident light due to total internal reflection. Diffraction allows for using periodic structures to change the direction of incident light. Next, major solar cell structures were considered that utilised these phenomena including antireflection coating, randomly textured surfaces, and periodic arrays. The major limitation of the paper is that it did not cover plasmonic light trapping (Spinelli et al., 2012).