The Distinction between Fear and Angst in Existentialism

The concepts of fear and angst are central to the philosophical school of existentialism (Sartre, 2007). According to philosophers such as Sartre (2007) and Kierkegaard (1996), existential angst was a result of a person experiencing their own freedom in comparison to their own expectations. Despite the fact that both fear and angst were vital to existentialism, there existed at least 3 separate definitions of these experiences divided between Sartre (2007), Kierkegaard (1996) and Heidegger (1968). Another question facing philosophers was whether there existed a meaningful distinction between fear and angst. The goal of the present essay is to address these 2 issues by comparing the fundamental works of Sartre (2007), Kierkegaard (1996) and Heidegger (1968). The structure of the analysis includes separate discussions of how fear and angst are defined by Sartre, Kierkegaard and Heidegger. The concluding section briefly summarises the findings and provides theoretical implications arising from the results.

Conceptualising Fear and Angst in Existentialism

Heidegger’s Perspective on Fear and Angst

The work of Heidegger (1968) focused on the fact that the universe and a person’s existence in their environment ultimately lacked any objective meaning. This implied that individuals regularly faced the need to establish their own rationales for their subjective outlooks on life, morality and mortality (Sharr, 2006). Angst, therefore, was an emotion experienced by all humans realising that there existed no meanings beyond their own experiences and cognitions. On the other hand, Heidegger (1968) did not provide a detailed definition of fear. The philosopher defined existence as being responsible for one’s own choices. Fear, therefore, could be an emotion arising from accepting this responsibility and fully realising that one’s free will had a major impact on one’s development. When evaluating this definition, Kokkoris et al. (2019) provided the following data on the correlation between free will and indecisiveness.

Figure 1: The Correlation between Free Will and Indecisiveness 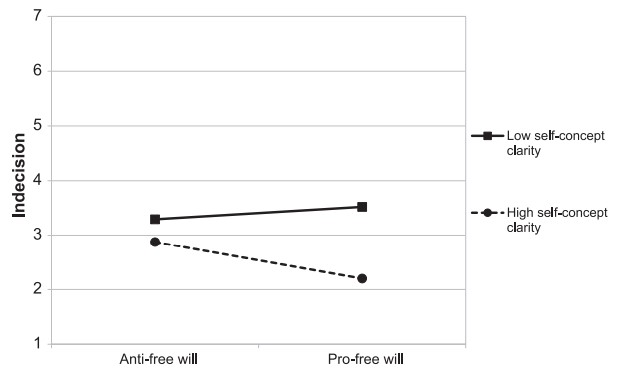 In contrast to the theories of Heidegger (1968), the authors stated that stronger beliefs in free will were associated with lower levels of indecisiveness. However, the results were only limited to individuals exhibiting high levels of the self-clarity concept (Kokkoris et al., 2019). Based on these findings, the essay could re-frame the original postulates of Heidegger (1968) as follows. Angst was a regular feature of human existence and had little impact on making everyday decisions. Fear, on the other hand, was a stronger negative emotion linked to exerting one’s free will and bearing responsibility for one’s own choices. If an individual faced difficulties in defining their own identity, fear possibly accounted for greater levels of indecisiveness associated with pro-free will beliefs (Kokkoris et al., 2019; Michelman, 2010).

A contrasting perspective on this distinction was that the later works of Heidegger, instead, focused on being open to existence and other individuals (Heidegger, 1968; Sharr, 2006). This meant that it was possible to at least partially overcome one’s fear. Nonetheless, the philosopher did not suggest whether it was possible to fully overcome angst. In a more recent review of the findings of Heidegger (1968), Shepherd (2015) noted that Heidegger’s existentialism advocated against certain experiences such as travelling. This meant that the avoidance of fear did not necessarily entail achieving higher levels of self-clarity. Instead, fear could be overcome by avoiding activities that, according to Heidegger (1968), failed to contribute to personal and social development.

Fear and Angst in Accordance with Kierkegaard

In direct contrast to Heidegger (1968), the works of Kierkegaard (1996) typically focused on angst and fear in relation to morality and the original sin. According to Kierkegaard, angst was a result of experiencing the freedom for making one’s own decisions (Matustik and Westphal, 1995). Angst was the uncertainty before choosing to commit to a particular action or a decision. While angst was frequently portrayed as a negative concept, the philosopher also acknowledged that angst could produce positive results (Kierkegaard, 1996; Caruso and Flanagan, 2018). Angst was the main driver of self-reflection, meaning that uncertainty provoked individuals to philosophise and attain greater levels of self-knowledge. While Kierkegaard (1996) provided a detailed definition for angst, the concept of fear received less attention from this scholar.

To address this issue, the essay argues that angst was defined as anxiety lacking a specific focal point in the works of Kierkegaard (Matustik and Westphal, 1995). Fear, on the other hand, was short-term angst arising from facing specific obstacles or complications. Supporting this interpretation, Lybbert et al. (2019) suggested that existential therapy had to focus on both angst and fear. The authors implied that fear was caused by individual events while angst constituted a long-term predictor of depression and suicidal thoughts (Lybbert et al., 2019). The benefit of such a distinction was the option to clearly delimitate between psychological factors, informing therapists and other experts in the field of psychology. However, such an argument largely ignored another facet of the original works of Kierkegaard (1996), namely the role of religion.

When analysing religion, Kierkegaard (1996) noted that humanity had the responsibility of creating its own code of ethics. Nevertheless, there existed a divine right for issuing commands superseding man-made laws and principles. From this perspective, fear of divine punishment was one of the motivators to adhere to both divine commands and human laws (Kaczanowski, 1962). The implication was that angst was a fundamental concept influencing all existence while fear was a result of a possible confrontation between oneself and the divine forces. The perspective of Kierkegaard was highly distinct from that of Heidegger in referring to religion as a possible source of fear. One critique of such an interpretation of the postulates of Heidegger was that the philosopher avoided a formal distinction between angst and fear in their works on religion (Matustik and Westphal, 1995). The question was whether the above explanation was embedded in the fundamental ideas of Kierkegaard.

Fear and Angst in the Works of Sartre

Similarly to both Heidegger and Kierkegaard, Sartre (2007) suggested that angst was a long-term emotion of distress. Angst was most frequently used by Sartre when examining how a person reacted to the inherent chaos of the universe. According to Sartre, humans were only governed by self-imposed constraints, presenting a discrepancy between the chaos of the universe and one’s own expectations of order (Warnock and Sartre, 2003; Crowell, 2012). Similarly to the works of Heidegger, Sartre linked angst to claiming one’s responsibilities. Both Heidegger and Sartre implied that angst was a source of negative emotions such as anxiety or depression (Hirsh, 2010; Corr and Fajkowska, 2011). On the other hand, Heidegger and Sartre differed in their perceptions of rationality. Sartre admitted that rationality may not exist; instead, only man-made subjective explanations of their behaviour were possible in a highly unstructured world.

One issue facing the essay is distinguishing between angst and fear in the works of Sartre (2007). A parallel may be established between what was stated by Sartre and Kierkegaard. While Kierkegaard linked human morality to religion, Sartre noted that each person was ultimately responsible for the whole of humanity (Sartre, 2007). A possible argument was that angst was a constant feeling of dread arising from one’s conflict with the meaningless universe (Crowell, 2012). Fear, at the same time, was the responsibility of representing mankind and guiding human development through one’s independent decisions. While this distinction was consistent with what was stated by Sartre, the philosopher did not make a formal distinction between angst and fear.

Another contrast between Sartre and the works of Kierkegaard was that Sartre incorporated the concept of abandonment into their definition of angst. According to Sartre, mankind was alone in the universe, meaning that angst was partially caused by the conflict between theistic expectations and the atheistic reality (Michelman, 2010). This was similar to the ideas proposed by Heidegger (1968). One acknowledgement that should be made in this essay is that Sartre expressed their regret for conceptualising angst as a function of personal responsibility for mankind (Warnock and Sartre, 2003). It was questionable whether the subsequent views of the philosopher would still be consistent with the definitions of angst and fear discussed in this analysis.

The essay demonstrated that angst was an unavoidable consequence of human existence. However, Sartre, Kierkegaard and Heidegger strongly differed in their conceptualisations of angst. Another question facing existentialism was making a formal difference between angst and fear. While there existed similarities between the works of different philosophers (such as the focus on personal responsibility), the disagreement on what constituted the sources of angst posed a challenge to existentialism as a philosophical school. The scholars also conflicted on the inclusion of religion into their theories with only Kierkegaard referencing divine ethics. The theoretical implication was that the issues facing existentialism were rooted in how this paradigm perceived being. Personal freedom and anguish were consistent features of existentialism. Nevertheless, this school of thought arguably failed to propose an unambiguous definition of being and how existence could be linked to angst and fear. This raised the question of whether existentialism was able to transition from the area of metaphysics as was originally claimed by Sartre (2007).

Michelman, S. (2010) The A to Z of Existentialism, Lanham: The Scarecrow Press.

Warnock, M. and Sartre, J. (2003) Being and Nothingness: An essay on phenomenological ontology, London: Routledge.