Sample Essay: The key characteristics of the economy of Pakistan and perspectives for its long-term growth

Pakistan is a country in South Asia with a population of 208 million people, which is the fifth largest population in the world (PBS, 2017). Pakistani economy is semi-industrialised with a well-developed agricultural sector and an increasing share of the services sector (Iqbal, 2016). It is one of the fastest growing economies in the world driven by the rapidly growing middle class (Kaplan, 2012; Alam, 2015).

The rates of real economic growth during the last four decades have been around 5%. Along with that, it is necessary to underline a high average inflation rate which is shown in Figure 1. 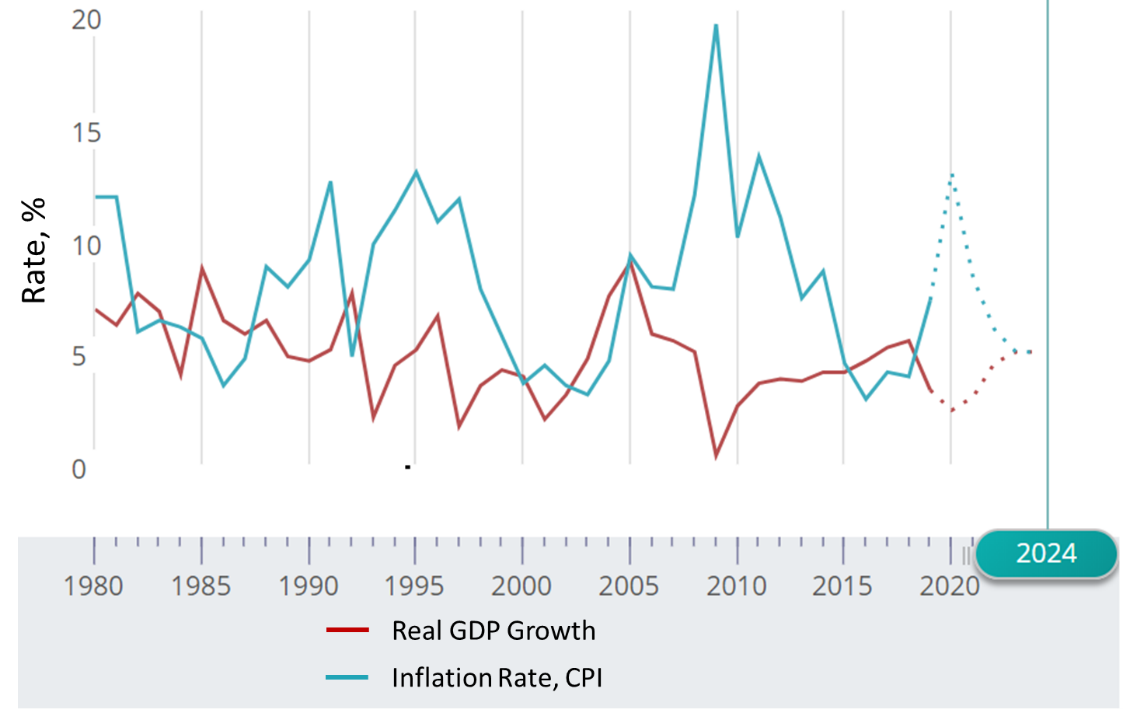 One of the main sources of inflation is the rigid structure of taxes, with 39% being direct taxes and 61% being indirect ones. The disadvantage of such high indirect taxes is that producers reimburse these costs by adding them to the end price of their products (Khan, 2019).

As for other key macroeconomic indicators, they are presented in Figure 2.

Figure 2 evidences that a current account balance has been increasing in the previous three years because of the increasing trade deficit, but this growth decelerated in 2019 due to devaluation of the rupee. This is because of low exports entailed by tough competition in the textile production, the main item of the Pakistani exports. Along with that, remittances from expatriates at the level of 7% of GDP partially mitigated the deficit. As for public debt, it increased by almost 10%, from 67.6% in 2016 to 73.0% of GDP in 2019 and it is expected to drive up the cost of borrowing for the government (COFACE, 2019).

Domestic debt increased by five times and external debt by 1.4 times in between 2009 and 2018. This makes the government spend almost 30% of the overall budget on servicing the debt which exaggerates the budget deficit (Khan, 2019).

Along with that, a cumulative depreciation of the exchange rate was at the level of 25.5%, the development budget reduced whereas energy prices increased. This entailed the deceleration of private consumption growth from 6.8% in FY18 to 4.1% in FY19 and a decline in investment by 8.9%. The industrial sphere growth decelerated from 4.9% in FY 2018 to 1.4% in FY19 while the services sphere grew by 4.7% in FY 2019 which is 1.5% lower than in FY 2018. Unfavourable weather conditions have undermined productivity of the agricultural industry and led to the growth of only 0.8%, which was significantly lower than the targeted growth of 3.8% (World Bank, 2019).

2. Strengths and Weaknesses of the Pakistani Economy

The perspectives of the Pakistani economy are vague although the potential drivers of growth are present. First of all, the main source of growth is the population growing at a rate of 2% annually, which expands the internal market. This also contributes to the availability of labour force (Mirxa et al., 2019). However, over 40% of workers are employed in agriculture which has at least two detrimental consequences. First, this labour force remains unskilled and second, agriculture substantially depends on weather and commodity world prices. Besides, health, agricultural and educational deficiencies are present. This makes the contribution of agriculture in the Pakistani economy quite low.

Second, there are two factors that may accelerate growth in the nearest future. The first one is that Pakistan is an important centre of Islamic finance which provides significant capital flows while the Pakistan stock exchange is among the fastest-growing stock markets in the world (Masood, 2018). Another factor is high amounts of transfers from expatriate workers which increase solvency of the country population. On the negative side, the Pakistani economy can be characterised by low diversification and dependence on external energy sources (Baz et al., 2019). Moreover, the level of regional development is very different, with Karachi being the industrial and financial capital of the country and Balochistan and other rural regions having slower development (COFACE, 2019).  It is estimated that the informal sector of the economy is about 40% of the country’s GDP while the collected taxes contribute only about 15% of GDP (COFACE, 2019). As mentioned, indirect taxes account for about 61% of all collected taxes. The harm of this tax structure for the economy is that indirect taxes including import duties excise taxes and fees are essentially regressive which implies that they mostly strike the poorest segment of the population. Furthermore, the applied system of indirect taxes turned to be too complex and ineffective while the introduction of the value-added taxation was sabotaged by the opposition (Masood, 2018). As for the direct taxes, the number of tax payers is extremely low, namely about 1 million per 116 million of the working population. Moreover, tax avoidance has become a norm in Pakistan (Cevik, 2016).

This is very low compared to peer emerging economies which generates one of the most striking problems of the Pakistani economy, namely a great imbalance between the public sector income and expenditure (Masood, 2018). Excessive expenditure includes persistent losses of some public enterprises (IMF, 2018) and losses in the power sector (World Bank, 2018). In addition, ineffective public investment exaggerates the mentioned imbalance (Masood, 2018).

Finally, the country is being torn apart by political instability. It is hard to speak about sustainable economic growth when there is no clear vision of the country’s future perspectives and the chosen course may substantially change in case of the arrival of a new government. This also makes the country’s perspectives dimmer for foreign investors who fear for the safety of their capital (Tabassam et al., 2016).

The main recommendations are connected with addressing existing imbalances in the economy of Pakistan in favour of more effective mechanisms for managing and distributing funds. First of all, the disbalance between public consumption and revenues that has been existing for decades should be mitigated. The measures for attaining this goal can be the revision and reform of the tax system in terms of tax structure, increase in the volume of collected direct taxes and optimisation of the indirect taxes regulation. Along with that, the governance of public enterprises should be enhanced to reduce their losses.

Solutions to the problems in the agricultural and power sectors would also contribute to fostering economic growth. Baz et al. (2019) suggest that policymakers and regulators should revisit their policies in these two sectors to make them more attractive for foreign investors. In particular, building new hydropower dams is required to provide the additional volumes of energy to the industrial sector and mitigate the deficit of water.

In this light, the findings made by Uddin et al. (2019) should be taken into account. These authors revealed that institutional factors including government size, legal structure and strong property rights, trade liberalisation and civil liberty have significant positive impact on FDI inflows. Among the institutional factors, regulation was indicated to have the strongest influence on inward FDI flows to Pakistan. Moreover, outcomes obtained by Tabassam et al. (2016) showed that political instability had a considerable negative effect on economic growth in Pakistan in the previous periods. Therefore, the government should undertake corrective measures to ensure political stability in the country.

A potential driver of growth for the Pakistani economy aimed at addressing these problems is the realisation of the China-Pakistan Economic Corridor (CPEC) project. This strategic project has been designed to stimulate economic relationships in the region as it will connect Pakistan's Gwadar port with the north-western part of China by 2030 (Mirza et al., 2019). According to CPEC, over US$46 billion are planned to be invested in Pakistan's infrastructure and in industrial, power, and agricultural spheres. This will allow for reducing power outages by means of increasing electricity generation capacity and investing in other sectors of the Pakistani economy. Given these capital injections, Pakistan is expected to gain the targeted increase in GDP growth rate by 7.5% by 2030 and create additional 2 million jobs.  Pakistan's vision 2025 accounts for these investments and plans fast urbanisation up to the level of 50-60% of the entire population and acceleration of economic growth to the rate of 8% already by 2025 (MPDR, 2015).

To sum up, the perspectives of the Pakistani economy look vague in the long term. On the one hand, its potential for growth is represented by the ongoing increase in population and thus labour force as well as opportunities to increase its internal market. On the other hand, the existing imbalances between government revenues and expenditure, ineffective public spending, poor-balanced tax system, deficit of power and water and persistent political instability that frightens potential foreign investors, do not allow for gaining sustainable growth.

Masood, A. (2018) Why Does Pakistan Have Repeated Macroeconomic Crises? Centre for Global Development, Available at: https://www.cgdev.org/sites/default/files/why-does-pakistan-have-repeated-macroeconomic-crises.pdf, [Accessed on 17 February 2020].

MPDR (2015) Pakistan 2025: One nation - One vision, Ministry of Planning, Available at: https://planipolis.iiep.unesco.org/sites/planipolis/files/ressources/pakistan-vision-2025.pdf [Accessed on 17 February 2020].

World Bank (2019) The World Bank In Pakistan, Available at: https://www.worldbank.org/en/country/pakistan/overview, [Accessed on 17 February 2020].