The Yugoslav wars of the 1990s attracted much attention and interest of historians not only because of their cruelty and savagery (more than 200,000 people were killed and around 3 million were expelled from their homes) (Dolečki et al., 2018). In addition to the fact that these wars took place in the heart of Europe, they also occurred at the exact moment when the confrontation between the USSR and the US was drawing to its culmination (Klemenčić and Schofield, 2001). In 1991, Croatia, one of the countries that made up the Socialist Federal Republic of Yugoslavia, declared its independence and sovereignty, which marked the beginning of the Croatian War of Independence (Matkovich, 2017). Only in 1995, after Croatian armed forced assisted the united Bosnian and Croatian side in Bosnia and Herzegovina, the war came to its end (Gagnon, 2013). This essay aims to critically overview the role of Croatia in the fall of Yugoslavia.

The Road to War

In 1941, after the invasion of Yugoslavia, Croatia became incorporated into the Independent State of Croatia, a puppet state of Nazi Germany and Italy (Finlan, 2014). However, after World War II, Yugoslavia, which consisted of six republics, namely Croatia, Slovenia, Montenegro, Bosnia and Herzegovina, Macedonia, and Serbia, became the Federal People’s Republic of Yugoslavia (Newman, 2015). Although the republics, de jure, were equal in their ability to influence the political and economic course of Yugoslavia, none of them was actually able to gain independence. Back then, Yugoslavia was a communist country with a highly centralised structure based on the Soviet model (Nazor, 2016). In this model, the Communist Party’s central committee was the highest organ. In reality, however, all political and economic decisions were taken by the executive committee, which is known as ‘Politburo’ in most communist states (Baker, 2015).

The first steps of socialist Yugoslavia on the international scene were taken with the full support of the USSR, which was idealised as a country that had managed to successfully construct the new socio-economic order based on the principles of social ownership, equality, and liberty (Macdonald, 2002). This adherence to the Soviet model had helped Josip Broz Tito, at the time the Prime Minister of Yugoslavia, gain the reputation of a loyal communist leader (Chomsky and Grubacic, 2018). At the same time, Yugoslavia still opted for taking an independent development course, which often came in contradiction with Stalin’s vision. Furthermore, Yugoslavia considered the USSR as an ally, while the Soviet Union viewed Yugoslavia to play the role of a satellite country in its ‘crusade’ against the imperialist block (Brew, 2018). The hegemonic aspirations of Stalin and frequent misunderstandings in cooperation between the countries changed Kremlin’s impression of Yugoslavia. As a result, the Tito-Stalin split took place in 1948 (Ramet, 2005). This decision was welcomed by the US who supported Yugoslavia economically by covering its trade deficit and supplying weapons. However, this support was taken with caution by Tito since he did not want to become too dependent on the US (Dolečki et al., 2018).

Tito was looked up as Yugoslavia’s hero in World War II and a strong national leader who managed to re-build the country and its economy (Gagnon, 2013). However, his death in 1980 triggered important socio-political changes in society, which eventually led to the Croatian War for Independence. The problems and challenges associated with the communist political system became first evident during the 1980s when Yugoslavia’s ability to service the interest on loans was put under question by the international community (Matkovich, 2017). The debt crisis and soaring inflation were ‘accompanied’ by the hatred between Serbs, Croats, and Muslims, which created ethnic tensions and resulted in the spark of nationalist movements in Croatia (Macdonald, 2002). Growing nationalism significantly changed ideology in Yugoslavia and splintered its Communist regime. Croatia and Slovenia formed a liberal-decentralised nationalist faction, which put forward the idea of creating a centralised federation that would allow for securing the republics’ economic and political interests across Yugoslavia (Brew, 2018). However, the political elites of Yugoslavia were against such course of action and they tried to eliminate the threat. Nonetheless, in 1991, Croatia declared its independence from Yugoslavia, which marked the beginning of the Croatian War of Independence (Gagnon, 2013).

Although internal factors are often reported to trigger the war for Croatia’s independence, it has been argued that the reasons existing in the external environment largely explain this conflict (Tanner, 2010). Even though Yugoslavia split its ways with the USSR in 1948, it was still considered as a pro-Soviet Union country. However, the USSR came to its end in 1991, making Yugoslavia more vulnerable to external pressures (Magas and Zanic, 2013). Furthermore, the end of the Cold War meant Yugoslavia was no more of strategic international political importance as a ‘buffer zone’ between East and West. Hence, the country lost political and economic support provided by the US, which triggered the need to reform its institutions and shift from communism (Galijaš et al., 2014).

The Croatian War of Independence

Croatia’s declaration of independence was considered by Yugoslavia as a threat to its integrity and it challenged the boundaries of Croatia as well as its intention to secede (Newman, 2015). Given that Slovenia, Bosnia and Herzegovina, Slovenia, and Macedonia followed Croatia and declared their independence as well, the remnant Serb-dominated Yugoslav state made out of Montenegro and Serbia embarked on an expansionist, aggressive policy, the main purpose of which was to reshape the political map of the region (Matkovich, 2017). The official reason behind this action was Yugoslavia’s intention to support and protect the existent substantial Serb minorities in Croatia from subsequent political, social, and economic unrest (Magas and Zanic, 2013). However, it has been argued that the adherence of the Yugoslavian government to the idea of centralism and single-party rule was amongst the reasons why Croatia was not allowed to withdraw from Yugoslavia. Hence, Serbia’s invasion in Croatia is viewed by some scholars as an attempt to prevent its first free elections (Brew, 2018).

Regardless of the true reasons behind Serbia’s invasion, cultural differences played a crucial role in the war. Serb minorities in Croatia and Slovenia were convinced by Belgrade’s propaganda that the newly established government in these republics was no better than fascists, which generated genocidal fears (Nazor, 2016). As a result, Serbs put up armed resistance in Croatia, putting its independence under threat from within, while the Serb-led federal Yugoslav army (JNA) attacked in the east. During the first phase of the military confrontation between Croatia and Yugoslavia, which largely took place between 1991 and 1992, the latter conquered roughly one-third of the former’s territory (see the Appendix). This was largely because Croatia’s forces were poorly equipped and ill-trained to fight with local fighters and paramilitaries at the same time. However, in 1992, the armed conflict was paused by the United Nations (UN), which helped Yugoslavia and Croatia agree on a ceasefire (Galijaš et al., 2014).

However, fighting was renewed in 1993 when the Croatian army managed to re-gain control over many occupied cities and territories (Klemenčić and Schofield, 2001). The UN once again stepped up to de-escalate the armed confrontation and deployed the United National Protection Force (UNPROFOR), a protection force in Serbian-held Croatia to supervise and maintain the peace agreement (Dolečki et al., 2018). However, in 1995, Croatia stated that the UNPROFOR’s mandate would not be renewed after its expiry because it considered the UN operation unsuccessful. Indeed, the UN failed to disarm and disband all armed groups in Croatia and guarantee the protection and safety for all individuals inhabited occupied territories (Chomsky and Grubacic, 2018). The Croatian War of Independence ended in 1995 soon after the North Atlantic Treaty Organisation (NATO) bombed the Bosnian Serbs.

Although the Croatian War for Independence has made Croatia an independent country, there is still no consensus amongst researchers and scholars on whether it was a civil war on an international war. On the one hand, neither Yugoslavia nor Croatia formally declared war on each other, meaning the conflict can be defined as a civil war (Finlan, 2014). On the other hand, the conflict involved the rump Serbia and Yugoslavia against Croatia, which implies that the war was an international armed conflict (Baker, 2015).

From being a puppet state of Nazi Germany and Nazi Italy to a satellite country of the Cold War, Croatia has made a long way to its independence. Since the 1980s, Croatia had been faced with a different kind of war, namely the transition from the totalitarianism of the Socialist Federal Republic of Yugoslavia into democracy (Matkovich, 2017). The military resolution of the dispute between Croatia and Yugoslavia was an entirely European problem since the USSR had ceased to exist and the US was removed (Tanner, 2010). Croatia defended its democracy, freedom, and self-determination at the cost to human life during its war for independence. In turn, Serbia, the remnant Serb-dominated Yugoslav state, ended the war battered, beaten, and alone (Klemenčić and Schofield, 2001). The Croatian War of Independence remains one of the bloodiest wars in Europe since World War II. As a result of this war, Yugoslavia finally dissolved into several independent republics (Magas and Zanic, 2013).

Klemenčić, M. and Schofield, C. (2001) War and Peace on the Danube: The Evolution of the Croatia-Serbia Boundary, New York: IBRU.

Matkovich, B. (2017) Croatia and Slovenia at the End and After the Second World War (1944-1945): Mass Crimes and Human Rights Violations Committed by the Communist Regime, Boca Raton: BrownWalker Press.

Nazor, A. (2016) The Croatian War of Independence: Serbia’s War of Conquest against Croatia and the Defeat of Serbian Imperialism 1991-1995, Scotts Valley: CreateSpace

Newman, J. (2015) Yugoslavia in the Shadow of War: Veterans and the Limits of State Building, 1903–1945, Cambridge: Cambridge University Press.

Ramet, S. (2005) Thinking about Yugoslavia: Scholarly Debates about the Yugoslav Breakup and the Wars in Bosnia and Kosovo, Cambridge: Cambridge University Press. 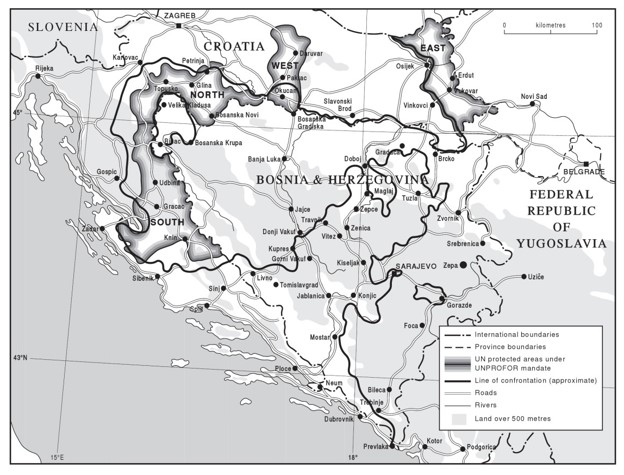