In the recent decade, many globally recognised corporations including Google, Disney, Facebook, Tesla, and Hulu announced major changes to their corporate and legal structures (Hesmondhalgh, 2018). While the stated reasons for these major transformations were different, they all fall within the same managerial concept called corporate restructuring. This phenomenon has been in existence for many years as many organisations used it to optimise tax burden, reduce overhead, refinance debt obligations or start new spin-off businesses to enter new market segments. However, the growing internationalisation and digitalisation of multinational corporations have made corporate restructuring a semi-obligatory step in the eyes of many practitioners (Birkinbine et al., 2016). Small companies rarely plan how they will scale up their internal structures and business units when their global operations grow manifold in volumes and complexity. Hence, any organisation seeking to become a major corporation may have to face the need to restructure at further stages of its growth. This essay aims to explore the main reasons for corporate restructuring, primary restructuring strategies, and recent organisational examples of corporate restructuring.

The reasons for restructuring usually involves the need to optimise corporate portfolios in order to minimise costs and increase internal coherence (Musyoki and Wamuyu, 2017). Many manufacturing companies such as Siemens had a vast variety of businesses ranging from cell phone production to industrial controllers, LED lights, and baby monitors. The brand funnel analysis performed by the company in the early 2000s allowed it to identify the areas with the lowest profitability and highest operational costs and sell these units to third parties. There also exists an opposite motivation for restructuring where corporations want to acquire new businesses or experiment with new competitive strategies (Moreira and Silva, 2019). While some corporate units may not be consistent with the new overall strategy, they can still be valuable to the main company as separate firms. Examples in this sphere include Treasury Wine Estates separated from Foster’s Group, DreamWorks Animation as a spin-off of DreamWorks Studios, and 21st Century Fox acquired by Disney and spun off as Fox Corporation in 2019.

Another popular motivation for restructuring is usually associated with a company-wide strategic change where the original corporate structure is incompatible with the new development direction or does not create viable inter-unit synergies (Gaughan, 2017). The creation of the Alphabet Inc. by Google may be seen as an example of this change format where the newly created conglomerate became the fourth largest technology company in the world in terms of revenue. The move also facilitated the creation of a centralised governance structure with original Google Inc. became an independent unit with a narrower scope of operations, which made the whole portfolio more consistent and transparent. The ‘going private’ strategy also involves major restructuring changes in legal and financial dimensions despite the fact that the internal corporate environment remains the same (Krishnamurti and Vishwanath, 2019). The managers deciding to ‘buy off’ the corporation from shareholders frequently have to create new entities in order to reflect the resulting distribution of power and ownership. Additionally, their views of future development may require further changes if it is substantially different from the one approved by corporate share owners previously.

Corporate restructuring can take place at multiple levels including the economy level, the industry level, and the firm level depending on the company size and the scope of the introduced changes (DePamphilis, 2019). Additionally, it can involve legal restructuring, financial restructuring, cost restructuring, repositioning, and other forms. Mergers and acquisitions (M&A) may be recognised as one of the most popular instruments of corporate structure changes since they allow established corporations to instantly acquire new competencies and capabilities through merging with another corporation or acquiring a smaller innovative business unit (Salazar and Alberto, 2019). At the same time, it should be noted that this form of restructuring is characterised by high failure rates due to the differences in company cultures preventing the realisation of planned synergies. The companies succeeding in M&A usually choose compatible targets or maintain the structural integrity of the acquired companies making them serve as semi-independent research and development departments rather than deeply integrated subordinate units.

Legal restructuring is another approach in this field that is usually used to realise various tax advantages associated with S-type corporation structures and other differences between available organisations (Altman et al., 2019). Some of these forms differ radically in terms of liability limitations, contractual capabilities, and reporting responsibilities, which makes it lucrative for major entities to break down to smaller business formations in order to avoid the adverse effects of the standardised approach.  This strategy may be supported by the financial and operational restructuring instruments shown in the following figure. They allow corporation owners to minimise costs, commute debt obligations in exchange for equity or liquidate certain underperforming units (Lubian, 2015). The measures may also be externally oriented and include takeovers and strategic alliances that can influence asset ownership and liabilities. The reorganisation of General Motors in 2009 may be recognised as a large-scale example of financial, legal, and operational restructuring involving the liquidation of the original company, the sale of multiple business units to third parties, and a complex bailout process preventing the bankruptcy of the slimmed-down main business. 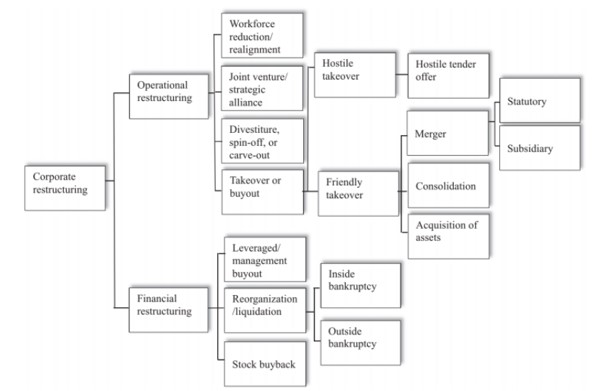 The Walt Disney Company can be seen as a perfect example of complex corporate restructuring strategies. In 2018, this corporation announced a strategic reorganisation of all its activities into four primary units (TheWaltDisneyCompany, 2018). These segments included Studio Entertainment; Direct-to-Consumer and International; Parks, Experiences and Consumer Products; and Media Networks. These changes reflected the new development vision where Disney+ streaming services were separated from the ‘core’ movie and animation studios as one of the new and highly profitable individual units (Bierman, 2017). Similarly, the accounting and legal provisions for physical businesses such as entertainment parks and the sales of souvenirs, memorabilia, and toys required a radically different governance structure and development vision than the sales of intangible services such as online subscription services. This move can also be recognised as a repositioning strategy since the newly created Direct-to-Consumer and International unit is planning to revive the ‘sleeping assets’ acquired by the company throughout the previous decade by offering the creative products of 21st Century Fox, Pixar, Lucasfilm, and Marvel to international audiences via digital channels (Patel, 2019).

The introduced changes occur at the economy and industry levels since they affect all global activities of Disney in multiple theme parks and production units (DePamphilis, 2019). The overall restructuring strategy of the company involves acquisitions, legal and financial restructuring, and repositioning. Specifically, Disney acquired Pixar, Marvel, Lucasfilm, and 21st Century Fox within the 2000s and the 2010s (Davis, 2019). This allowed this corporation to expand its own streaming and production units and laid the foundation for the recently introduced Disney+ service. The Fox News and Fox Sports acquisitions also allowed the corporation to also enter the market for sports events broadcasting and the news business. Overall, the new structural design is largely substantiated by the ongoing digital disruption occurring at the global economy level after the emergence of Netflix, Apple, and Amazon entertainment services.

The current steps of Disney corporate reorganisation logically emerge from the 2016 acquisition of the New-York-based BAMTech company possessing substantial expertise in streaming services as well as sports events broadcasting (Davis, 2019). Hence, the restructuring strategy of the studied organisation may be seen as a long-term one. It also involves the changes in the core competitive model on the basis of newly acquired competencies that realign their utilisation patterns to increase the produced customer value. At the same time, these changes also involved substantial layoffs and operating income fluctuations (Mcnary, 2018). These factors suggest that Disney experiences certain struggles with repositioning and cost restructuring and utilised strategic transformations to create cost economies between individual units in addition to capitalising on the newly emerging market opportunities.

It can be summarised that the examples of major corporations such as Disney explored in this essay demonstrate the positive effects of properly conducted restructuring procedures on corporate profitability and operational effectiveness (Gaughan, 2017). The constant changes in the external market environment, newly emerging technologies, and changing consumer tastes imply that all companies in the market seeking ongoing expansion have to face the need for reorganisation at some point in their development. While mergers and acquisitions have historically been one of the most popular tools in this dimension, their limited effectiveness suggests that corporations should focus on the legal, financial, and operational restructuring of their core businesses as the primary measure (DePamphilis, 2019). The studied example of Disney demonstrates a combination of these two approaches where extensive acquisitions are followed by large-scale strategic reorganisations based on the global or local character of operations as well as the degree of services digitalisation (Bierman, 2017). The operational changes also facilitate the utilisation of some acquired assets that can be used more effectively within the scope of the new strategic directions such as streaming services.

Moreira, A. and Silva, P. (2019) Handbook of Research on Corporate Restructuring and Globalization, Hershey: IGI Global.