A vector autoregression model (VAR) is a model often used in statistical analysis, which explores interrelationships between several variables that are all treated as endogenous. This is an atheoretical model meaning that the choice of variables does not have to be backed by any specific theory and the relationship is determined based on the effects of previous changes in one variable on current changes in the other variable along with the effects of past changes of the variable on its own current changes. So, a specific trait of this model is that it includes lagged values of the employed variables as regressors. This allows for estimating not only the instantaneous effects but also dynamic effects in the relationships up to n lags.

In fact, a VAR model consists of k OLS regression equations where k is the number of employed variables. Each equation has its own dependent variable while the explanatory variables are the lagged values of this variable and other variables. 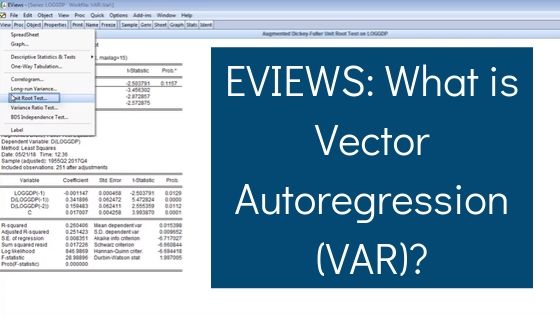 Estimation of a VAR model includes the following steps:

Information criteria (IC) are employed to determine the optimal lag length. The most commonly used ones are the Akaike IC, Hannah-Quinn criterion and Schwarz criterion.

The variables may be non-stationary but integrated of the same order. In this case, they can be analysed with a Vector Error Correction Model (VECM) instead of VAR. The Johansen cointegration test is conducted to check whether the variables integrated of the same order share a common integrating vector(s). If the variables are cointegrated, VECM is applied in the following analysis instead of a VAR model. VECM is applied to non-transformed non-stationary series whereas VAR is run with transformed or stationary inputs.

A VAR model is run with the chosen number of lags and coefficients with standard errors and respective t-statistics are calculated to assess the statistical significance.

The IRFs are used to graphically represents the results of a VAR model and project the effects of variables on one another.

The variables may be related but there may exist no causal relationships between them, or the effect may be bilateral. The Granger test indicates the causal associations between the variables and shows the direction of causality based on interaction of current and past values of a pair of variables in the VAR system.

Still feeling lost? Our YouTube channel contains tutorials on a variety of statistical softwares, including our popular VAR Eviews tutorial!